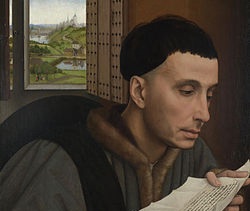 In Malta, the 17th of December is the feast day of the Catholic patron saint of lawyers, this being Yves Helory de Kermartin, traditionally known to us as Sant’Ivo. Why this is the celebrated date it is not really known, since really and truly, he is commonly and widely celebrated on the 19th of May all around the world.

Be it as it may, every December 17, lawyers take off their togas, and convene together outside the law courts, and away from the daily hustle and bustle of the courtrooms, to celebrate together a year of hard work.

Sant’Ivo was born in Kermartin, near Tréguier, Brittany (today a part of France), on the 17 October, 1253 and died at Louannec, on the 19th May, 1303. Sant’Ivo was the son of a nobleman and from a well to do family. He first studied civil law and later canon law and was learned thereon. It is said that among his classmates were the likes of Duns Scotus and Roger Bacon.

He also studied theology and is said to have also joined the Third Order of Saint Francis, being what in Maltese we might call a ‘terzjarju’, although he was later ordained to the priesthood too. Due to his charitable disposition, he became known as the advocate of the poor, especially since he represented the helpless and paid for their expenses in court. He also visited those he assisted in prison. All this presumably as higher acts of charity rather than out of professional duty and diligence.

He was above all an incorruptible diocesan judge, refusing the bribes that were the order of the day, and working to settle claims out of court in order to save the litigants time and money.

Sant’Ivo was also an ecclesiastical judge, and that might also be why certain sources also describe him as a patron saint for jurists, magistrates and judges as well.

He was known as ‘the Honest Lawyer’, (a surprising moniker, one must admit) so much that he is the subject of an amusing piece of doggerel found on his tomb in Tréguier Cathedral in Côtes-d’Armor, France, reads: Sanctus Ivo erat Brito Advocatus et non latro Res miranda populo (‘St. Ives was from the land of beef, A lawyer, and not a thief; A stretch on popular belief’).

The words of another Catholic saint of our period, Saint John Paul II highlight the greatness of Sant’Ivo:

“St Ivo was involved in defending the principles of justice and equity. He was careful to guarantee the fundamental rights of the person, respect for his primary and transcendent dignity, and the protection that the law must guarantee him. For all who exercise a legal profession, whose patron saint he is, he remains the voice of justice, which is ordained to reconciliation and peace in order to create new relations among individuals and communities and build a more impartial society. I give thanks for the shining example he offers to Christians today, and on a broader scale, to all people of good will, inviting them to walk on paths of justice, of respect for the law and of solidarity with the poor, to serve the truth and to take part in “a new “creativity’ in charity”.”

On this day, may all lawyers get the rest they deserve, and may they all follow the example of Sant’Ivo during the exercise of their profession.